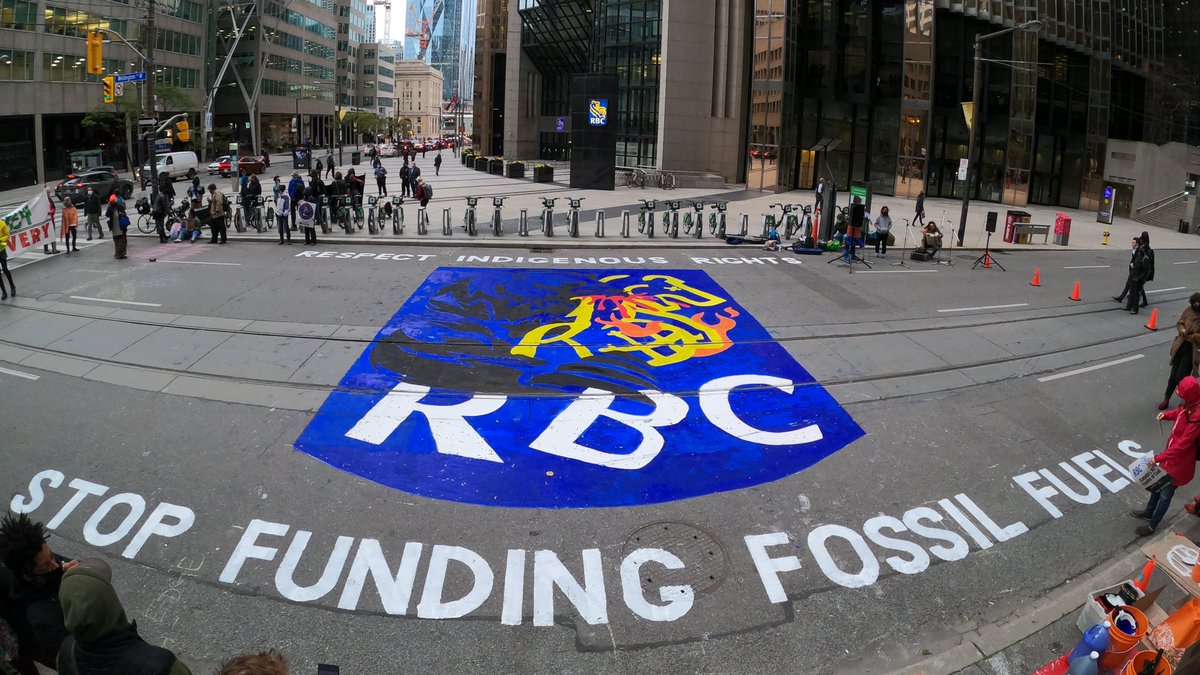 Montreal / Toronto / Vancouver — Thousands of Canadians across the country are today protesting Canada’s largest bank, RBC, which refuses to stop financing fossil fuels. RBC has invested more than $200 billion in fossil fuel projects since the Paris Climate Agreement was signed. These include projects that violate Indigenous rights, like the Coastal GasLink pipeline.

With COP26 focused heavily on the role of finance in the climate crisis, protests are also taking place today at banks across the UK, US, and Europe, with Greta Thunberg attending a protest at Standard Chartered Bank in London. Actions are expected across Africa, South America, Australia, and Europe. Images and news of the day are available here.

On Wet’suwet’en Territory, Indigenous leaders from Gidimt’en Checkpoint are protesting at the drill site under the WedzinKwa River. In Toronto, participants are blocking Wellington Street in the heart of the financial district. In Montreal, groups are rallying in front of RBC’s offices. Protests are also happening in Vancouver, Ottawa, and more than 30 other locations.

“Coastal Gaslink criminalizes and arrests chief Dsta’hyl of the Likhtsamisyu clan and a young Gixtsan chief for being on their territory, and refuses them access to their lands,” explains Eve Saint of the Wet’suwet’en nation. “How can RBC fund this project while pretending to work towards reconciliation?”

In Canada, the focus on RBC is due to its exceptionally high financing of fossil fuels compared to other banks, as well as its hypocrisy in funding projects on unceded Indigenous territory such as the Coastal Gaslink Pipeline. RBC has poured $208 billion into fossil fuels since the Paris accords and is a major lender to the CGL pipeline, which Wet’suwet’en Land Defenders are resisting. RBC has publicly lauded itself on its inclusive approach with Indigenous communities built on “mutual respect and shared values.” But, if built, the Coastal Gaslink Pipeline RBC funds would expedite the construction of subsequent bitumen and fracked gas pipelines, and create incentive for gas companies to tap into shale deposits along the pipeline right of way.